The Invention of the Trimmer Mower

Most of what passes for innovation in the realm of outdoor power equipment are simply new features that allow us to gain a measure of efficiency without fundamentally changing the job we do or how we do it. They may make the jobs easier but are not necessarily “game changers.”

The invention of the Trimmer Mower (also known as a “trimmer on wheels”) was different. In part, that’s because the equipment it improved upon was such a huge source of frustration to so many professionals and homeowners that lots of them gave up on it completely. The source of that frustration is the String Trimmer (also known as the “weed whacker”). 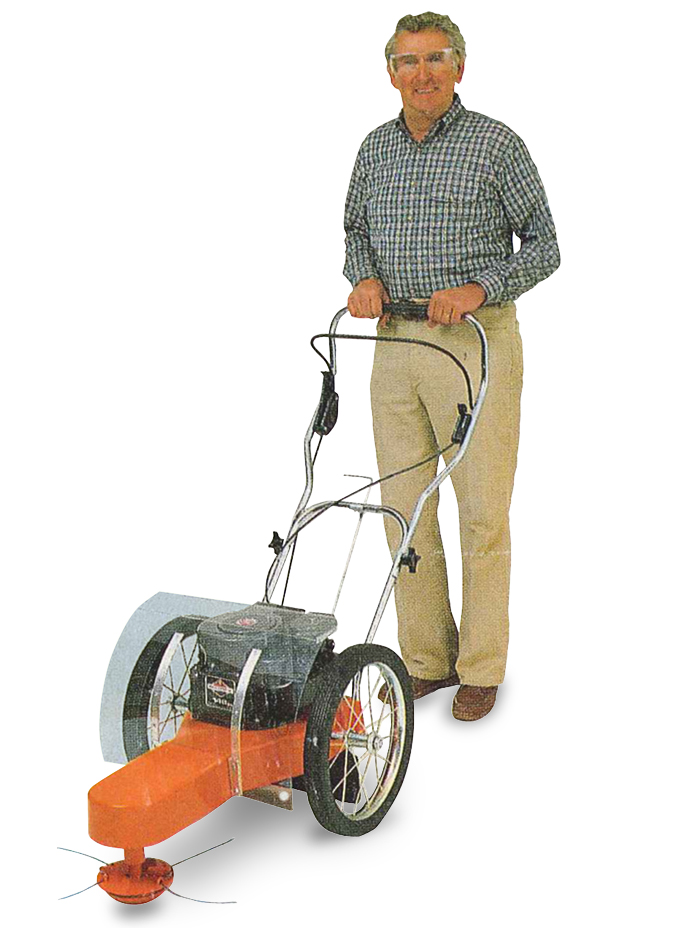 One of the first DR Trimmer Mowers from the 1980s.

But first — before we get into the ways in which a String Trimmer has been usurped by the Trimmer Mower — we should acknowledge that some of the infamous problems with string trimmers have been significantly improved upon in recent years and, partly as a result, they continue to be valuable tools for many. For example, the old “bump feed” systems, featuring monofilament trimmer line, were almost guaranteed to produce a tangled mess and some salty language from the user. It was “normal” to spend more time unsnarling the line than using the trimmer. 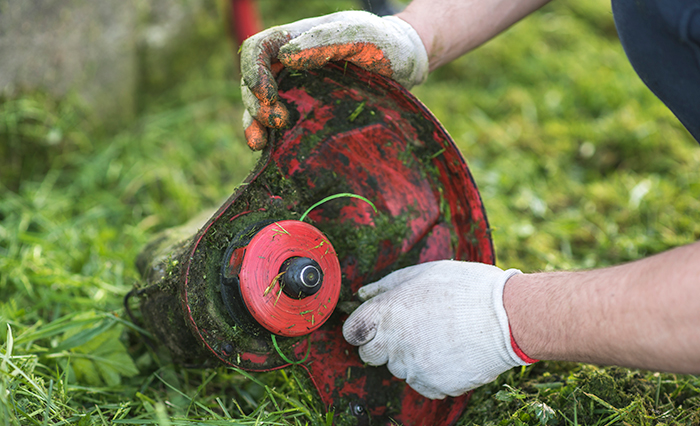 Another common complaint was the piercing whine of the 2-stroke engine and the stink of the oil burn. That was bad for the operator, bad for the neighbors, and bad for the planet.

Today, between improvements in self-feeding line, gas engines, and the growing prominence of quieter, cleaner battery power, these pain points have been mostly alleviated. 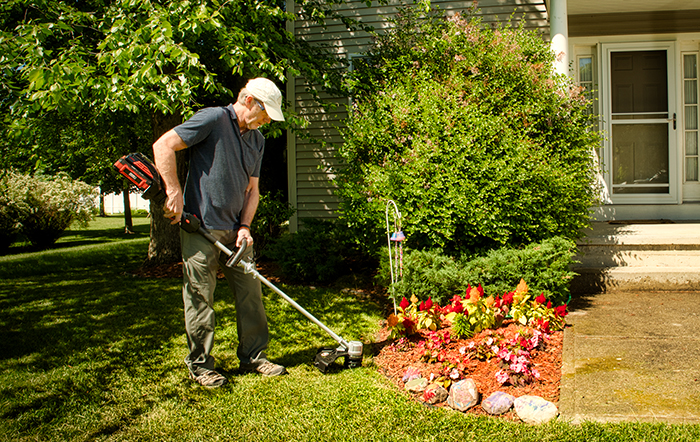 Battery powered string trimmers are cleaner and quieter than their gas-powered counterparts.

String Trimmers (the Not So Good)

The one problem inherent in the string trimmer concept that remains today is the one that the Trimmer Mower solves: user fatigue. For a suburban user who just wants to clean up the few spots their lawn mower left untouched (grass along a foundation, weeds in a rocky area, etc.) a string trimmer is quick, light, and easy to use. But a string trimmer requires that you hold it away from your body. Even with harnesses and/or “ergonomic” handles, this can be very demanding. Anyone who has used a sting trimmer for more than 20 minutes or so knows how taxing they can become with prolonged use.

Long sessions with a handheld trimmer turn into hard labor!

Many country property owners have fence lines that can stretch to hundreds, even thousands, of feet. Trimming all that can take hours. On any professional lawn care teams — the “mow, blow, and go” crews — there are employees who trim all day long. It is difficult enough to keep employees when the work is highly repetitive, but when the job includes pain (back, neck, and arms). 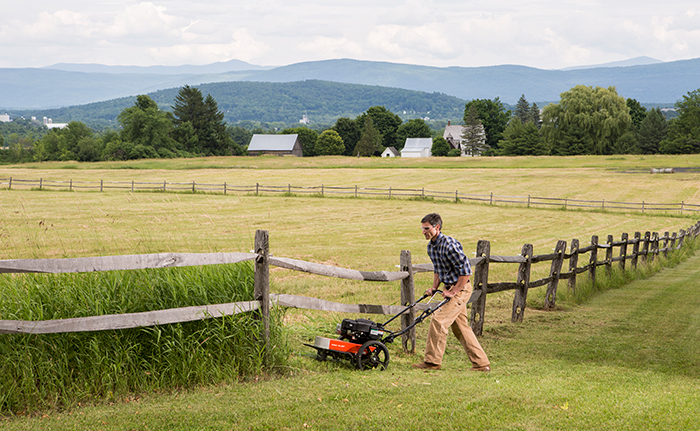 Trimming long fence lines is a breeze with a trimmer mower.

Bring on the Wheels!

Some innovations, in hindsight, seem obvious. By mounting the trimming mechanism on a structure with easy-rolling wheels, user fatigue instantly became a non-issue. A trimmer mower is significantly lighter than a lawn mower and, as a result, it can easily be used for hours without operator discomfort. A trimmer mower is much lighter than a lawn mower and with its oversized wheels (up to 16” in diameter) it is far easier to maneuver. Turning it around or rolling it back and forth to clear out undergrowth is much easier than attempting the same maneuver with a lawn mower. In fact, it can even be done one-handed! 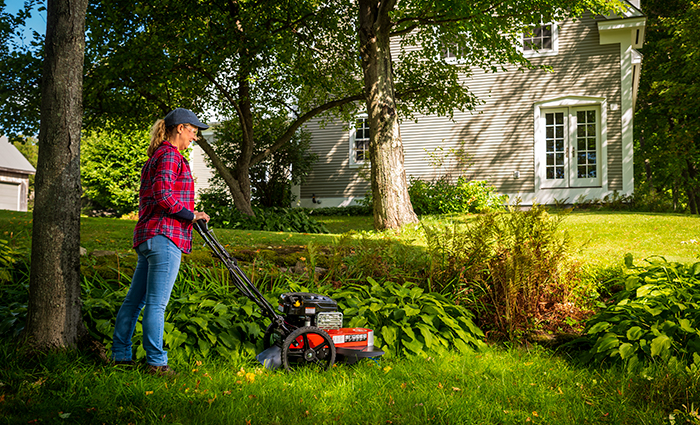 String trimmers are also limited by the size of their engines or electric motors, which must be small so that the operator can carry them around. The wheels on a trimmer mower made it possible to use a much bigger and more powerful gas engine or electric motor. That greater power enabled 1) the use of much thicker, heavier duty trimming cord capable of tackling heavier growth, and 2) the use of attachments that can cut brush and even saplings. If it is the big wheels that took the pain out of trimming, it is the bigger engine/motor that put the “mower” in Trimmer Mower. 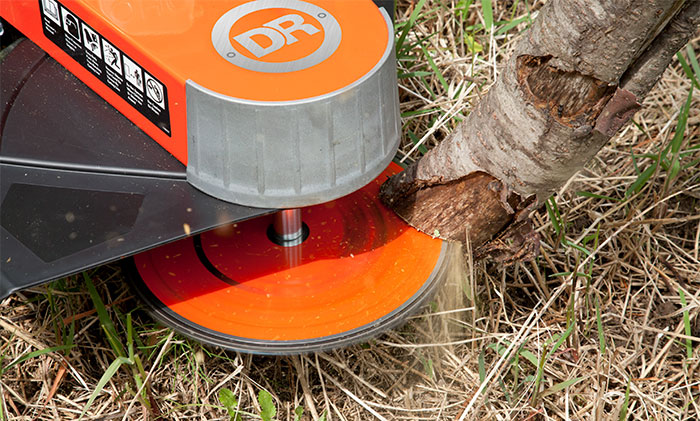 The Beaver Blade attachment cuts brush up to 3” thick.

A great invention will often achieve more than it set out to achieve. The team that invented the first trimmer mower — the original owners of the company that became DR Power Equipment — were searching for an easier way to trim without the back and arm pain. Their solution did that, AND enabled mowing thick field grass, AND allowed mowing in off lawn areas where you would never take a bladed mower, AND it could be accessorized to also cut brush. A Trimmer Mower is really three machines in one!