What are the differences between hand trucks, dollies, and carts?

Hand trucks stand upright with two large wheels. Their L-shaped design enables you to slide the bottom under heavy items and lift them simply by tilting the hand truck back. A hand truck is also called a two-wheeler, stack truck, hand trolley, or appliance dolly (yes, that one’s confusing).

Their vertical design makes them ideal for moving tall or heavy items like refrigerators or armoires. Smaller things like boxes can be stacked onto a hand truck and moved safely at the same time. 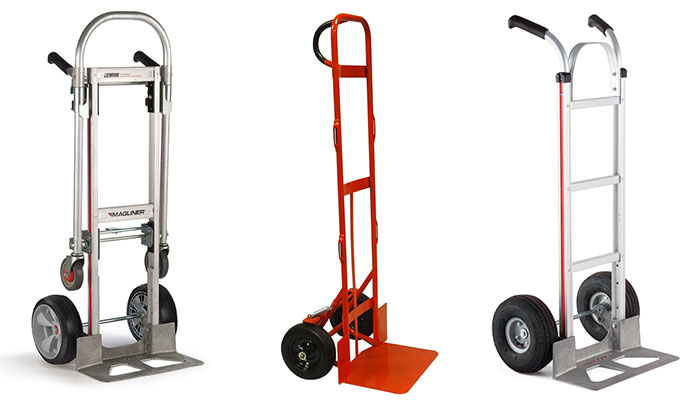 Hand trucks come in many styles and load capacities for various purposes.

Dollies are basically rolling platforms. The raised platform and four wheels fit entirely under heavy objects, making them move easily by rolling. Unlike hand trucks, dollies require you to pick up and place items onto the platform, but they can be used for moving bulky furniture or other items that could never balance on a hand truck. Since most dollies have open bottoms, those are ideal for moving one bulky item at a time.

Depending on the model, many dollies can be unpredictable in motion because they don't have handles and use casters instead of wheels. Some do come with fixed casters rather than swivel casters and locking foot brakes to provide a bit more control. It’s best to have another person around when using a dolly. 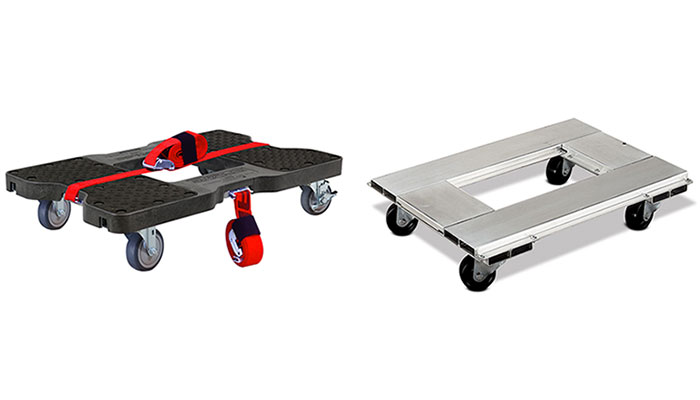 Some dollies can be connected to each other for additional surface area.

Carts are similar to dollies but have solid bottoms and handlebars. Also called platform trucks, many have enclosed sides so you can safely pile several items and move all at once.

Carts and dollies are frequently confused even though they are quite different. Carts always have handlebars and solid bottoms rather than the open bottoms you’ll usually find on dollies. Most carts also feature a combination of swivel and fixed wheels whereas dollies use one or the other. 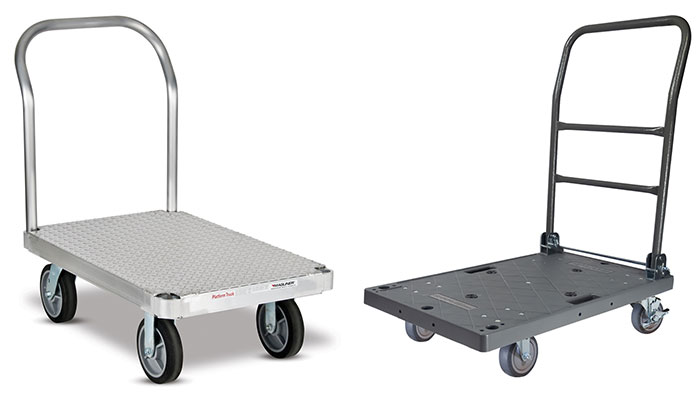 Carts provide more stability than dollies with their handles and mixed wheels.

Dolly carts are a hybrid of both and are essentially sturdier dollies with panel bars or handles. The key difference between a cart and a dolly cart is the bottom: if it’s open like a traditional dolly, then it’s a dolly cart. Like standard carts, most have a combination of two swivel and two fixed casters for extra maneuverability.

What are the different types of hand trucks?

Two-wheel hand trucks are the standard type of hand trucks. They are available in many different sizes and weight capacities depending on what you’re moving. Higher end models come with hand brakes and a kick stand for safety and better control when going down ramps.

easily change from a two-wheel hand truck into a four-wheel cart. They come with a sliding frame and additional small wheels on the top. Some models are only vertical and horizontal while others come with extra positions in between (usually 45°), which is helpful for distributing weight. 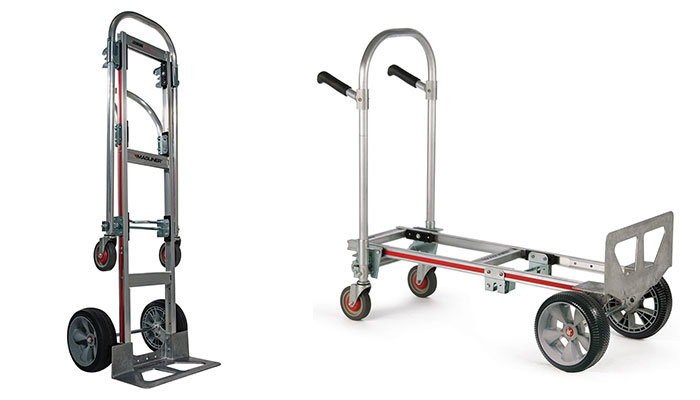 Simply lower the frame to turn the hand truck into a cart!

Appliance and special-use hand trucksare designed for moving a specific appliance or product like large water jugs. They come with upgraded features like self-retracting straps, wings for wide loads, and extra wheels for lowering to 45°.

Stair climbing hand trucks have extra design features (usually powered) to help ascend or descend stairs. Most models come with several speeds that you can change with a button.

Stackers and lift hand trucks make easy work of lifting heavy items. They are powered models that raise loads in tight spaces and reduce injuries for those lifting kegs or cases on a regular basis. They look like standard two-wheel hand trucks but have an extra platform that lifts the load with the push of a button. 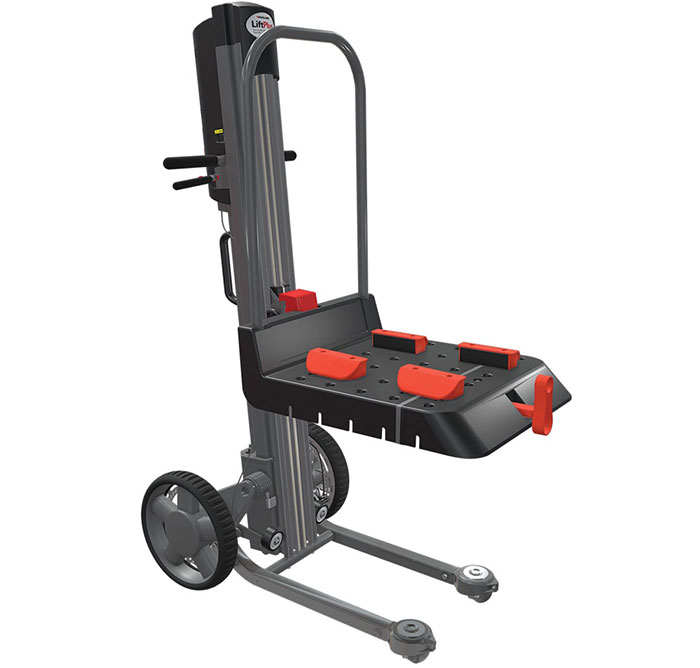 Which material is best for hand trucks?

Aluminum hand trucks are a lightweight alternative to standard steel hand trucks. They are easy to use, cost-effective, and reduce the risk of injury.

Steel hand trucks are the highest quality option. They are rust and corrosion resistant and can hold upwards of 800-1,000 pounds. Their only downside is how heavy they are, but this shouldn’t be an issue if it’s only used for a few items.

What are the different types of carts?

Push carts are the standard type of moving carts and are sometimes just called work carts. Many come with fancy features like brakes and predrilled holes to add tie-down straps or something to secure your items.

Folding carts use the typical push cart design but with a collapsible frame. These are ideal for anyone with limited storage.

U-Boat carts are also similar to standard push carts but have two handlebars on either side and usually six wheels instead of four. These are ideal for stacking many bulky items that need extra support on the bottom and sides. Most come with foot brakes for safety. U-boat carts are also called platform carts. 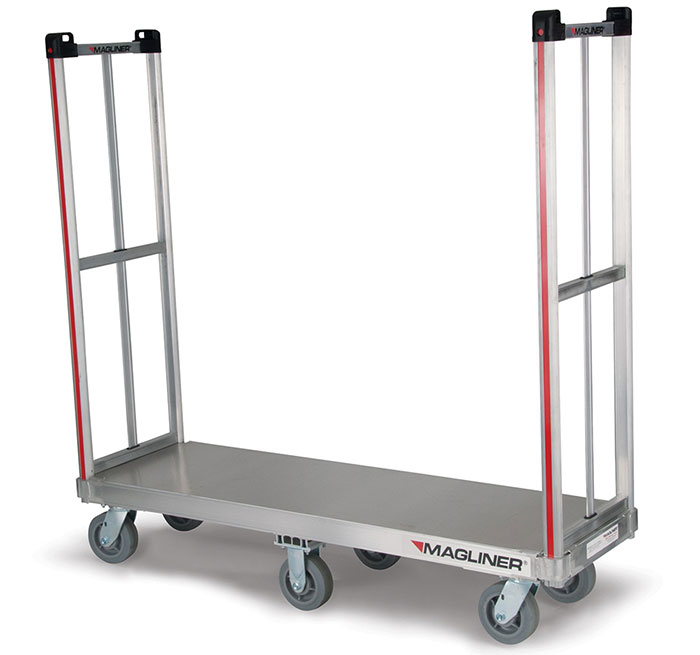 U-Boat carts are perfect for moving tires and other heavy items that need support on the sides.

Powered carts or electric carts are heavy-duty options for moving the most challenging items. These are motorized so the self-propulsion does all the work instead of your arms. Powered carts are used primarily by hospitals or warehouses but are handy for moving something too heavy to push.

Which material is best for carts?

Foam carts are an economical choice and won’t rust, chip, dent, peel, or splinter. Most come with steel handlebars and frames for extra support.

Steel carts are the sturdiest option and can hold upwards of 2,000-3,000 pounds. These can be pricey but they allow you to transport lots of heavy items at once.

Carpeted or vinyl-covered carts have a layer of padding to provide extra protection. These are ideal for moving furniture or other items that easily scuff.

What are the different types of dollies?

Caster dollies are the standard type of dollies and usually referred to as furniture dollies. They are a few inches off the ground and come with four casters that are either fixed or swivel. Caster dollies with closed bottoms often use a fifth caster for added support. A traditional open-bottomed caster dolly is sometimes called an H-Dolly. 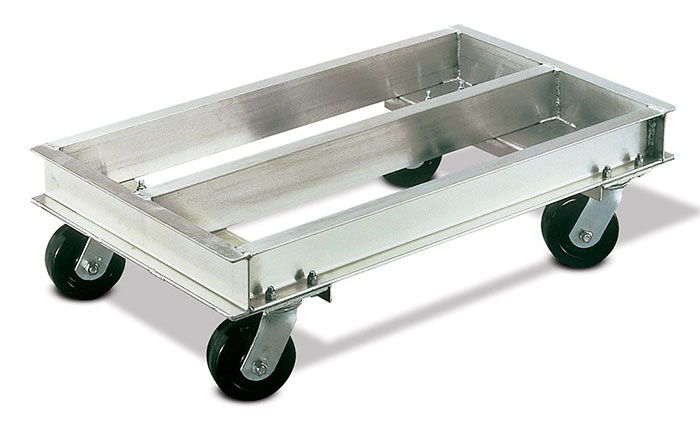 Some caster dollies come with an extra support beam down the middle.

Pallet dollies use casters and a platform that are closer to the ground. These are ideal replacements for forklifts and best for transporting large, heavy objects. Many come with 6-10 casters and can handle a weight capacity up to 8,000 pounds. Models with towing hitches or a handle kit add extra control.

A-Frame dollies have closed bottoms and A-shaped supports, which are used to hold shelves or racks for moving pipes, bars, or sheets of plywood.

Which material is best for dollies?

Wood dollies are the traditional type and best for lighter loads. They are the most budget friendly and widely available choice. The majority of wood dollies have open bottoms.

Plastic or resin dollies are usually sturdier than wood and many are designed with heavy-duty steel frames for extra support. These are resistant to water, oil, grease, and other chemicals or natural elements.

Aluminum dollies are a more durable option than wood or plastic and much lighter weight than steel. The design choices are split between open bottom, closed bottom, and mostly open with an additional support beam in the middle.

Steel dollies are the strongest options and best for your heaviest loads. They can be expensive but it’s worth the price to protect your valuables. The majority of steel dollies have closed bottoms.

Carpeted or rubber-capped dollies have raised ends that provide extra padding. These are ideal for protecting easily scuffed furniture as well as walls and doorways as you’re rolling it. Most have a wood base under the padding.